You are here: Home / More / The Scouting Party | February 2013 ScoutCircle

We are pleased to welcome author David Scott for a discussion of his book ‘The Scouting Party’ to our February ScoutCircle. February marks the anniversary of the founding of the Scouting movement.  The official birthday is February 8, and the entire month of February is designated as Anniversary Month. 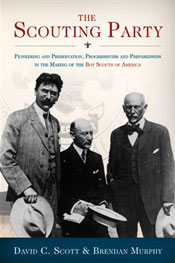 The Scouting Party tells the story of the strong-minded and at times conflicting individuals who shaped the Boy Scouts of America.

The authors examine the role of British-Canadian naturalist Ernest Thompson Seton, whose trailblazing Woodcraft Indians strongly influenced the British founder of Scouting, General Robert Baden-Powell. Seton became the intellectual mainspring of the Boy Scouts of America in its formative years. But BSA organizers preferred Baden-Powell’s more conventional model to Seton’s vision of a youth movement based on the culture and values of the American Indian.He also clashed frequently with Daniel C. Beard, an illustrator for Mark Twain and founder of the Sons of Daniel Boone, a rival to Seton’s Indians. Seton and Beard both wrangled with BSA Executive Secretary James E. West, who arbitrated their frequent wrangles while keeping BSA solvent as the organization rapidly expanded.

Dallas native David C. Scott has been involved with Scouting for over 30 of his 43 years. As a 1981 recipient of the Eagle Scout award, including 5 Eagle palms, Mr. Scott grew-up in the Circle 10 Council and prospered under quality adult tutelage as a Cub Scout as well as a Boy Scout. A Vigil Honor member in the Order of the Arrow and a Wood Badge recipient, he graduated Vanderbilt University in 1988 with a B.A. in Psychology and continued onward to SMU, where he earned a master’s degree in Applied Economics in 1993.

He has been married to his wife, Aimee, for nearly 20 years, and they have four children – two girls and two boys.